Morcellator lawsuit filings have begun to mount in U.S. courts, following an urgent alert from U.S. health regulators that these surgical tools can result in the spread of undetected cancer cells when they are used in minimally-invasive uterine surgeries. Considering that power morcellators are used in some 50,000 laparoscopic hysterectomies and fibroid removals every year, potentially hundreds of claims could eventually be filed against the manufacturers of these surgical tools.

Power morcellators are electronic devices that use a rotating blade to grind down fibroids and uterine tissue in order to facilitate its removal through a small abdominal incision. Since the first of these products were launched on the market in the mid-1990s, morcellation procedures have become extremely popular, as they are associated with less pain and scarring, as well as shorter hospital stays and recoveries, than traditional open surgeries.

In February 2014, the use of electric morcellation came under scrutiny, after two articles published in the Journal of the American Medical Association reported that the technique can disseminate undetected uterine cancer cells into the abdomen and pelvis. This can cause a cancer to jump from stage 1 to stage 4, greatly reducing a woman’s chances of long-term survival. 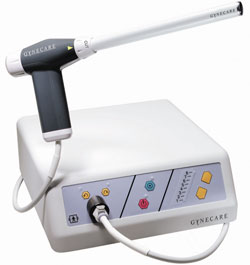 That same month, what may have been the first power morcellator lawsuit in the U.S. was filed by a Pennsylvania man who lost his wife to a rare but aggressive form of uterine cancer that was allegedly spread by one of these devices. The complaint, which named Johnson & Johnson’s Ethicon Inc. unit, iNA Medical US d/b/a LiNA Medical, and Blue Endo as defendants, alleged that the companies’ morcellation products were marketed without adequate testing. It also accused the defendants of failing to warn “about the possibility of seeding an undiagnosed sarcoma” associated with the use of their devices. Multiple medical device manufacturers were named in the morcellation lawsuit because the facility where the deceased woman’s surgery was performed refused to disclose which brand of morcellator was used in her procedure.

Last Modified: February 5, 2016
Private Case ReviewWere you or a loved one harmed by a prescription drug or medical device? Get a free case review.
Connect with: