Zofran, known by the generic name ondansetron, is an anti-nausea medication approved to prevent nausea and vomiting associated with surgery or cancer treatments, including chemotherapy and radiation. The medication belongs to a class of drugs known as 5-HT3 antagonists, which impact the central nervous system. Specifically, Zofran targets serotonin, a neurotransmitter believed to play a role in the onset of nausea and vomiting.

Zofran was brought to market by GlaxoSmithKline in 1991, and the first generic versions were available by 2006.While Zofran is not approved to treat nausea and vomiting associated with pregnancy, the medication has become a popular remedy for morning sickness. Zofran can be administered both orally, in the form of tablets or liquid, or via injection.

Side Effects of Zofran Anti-Nausea Medication

Common Zofran side effects may include diarrhea/constipation, headache, a tired feeling, and drowsiness. Some people have been known to experience an allergic reaction related to Zofran, which may present with a rash or hives; fever or chills; difficulty breathing; and/or swelling in the face, lips, tongue, or throat. 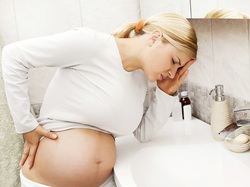 Zofran has also been linked to a potentially fatal complication called “serotonin syndrome,” which is caused by the excess accumulation of serotonin in the body. According to its prescribing information, serotonin syndrome related to the use of Zofran has occurred in patients who were taking the anti-nausea medication along with another serotonergic drug, such as an SSRI antidepressant. Symptoms of this condition may include:

The U.S. Food & Drug Administration (FDA) has warned that patients treated with the Zofran anti-nausea medication may be at risk for developing abnormal changes in the electrical activity of the heart, which can result in a potentially fatal abnormal heart rhythm.

There have been no adequate, well-controlled studies to demonstrate the safety and effectiveness of Zofran for pregnant women. Yet the medication is frequently used off-label to prevent nausea and vomiting in pregnant women who experience severe morning sickness. Physicians are free to prescribe FDA-approved medications in any way they see fit, even if the drug in question has not been indicated for that particular use. However, pharmaceutical companies are legally prohibited from marketing their products based on off-label indications.

In July 2012, GlaxoSmithKline agreed to pay $3 billion to resolve charges levied by the U.S. Department of Justice regarding the alleged improper marketing of several medications, including Zofran. Among other things, the government had accused the company of promoting the anti-nausea drug as a treatment for morning sickness.

Studies exploring the effects of Zofran on the developing fetus have resulted in conflicting findings. In February 2013, research published in The New England Journal of Medicine found no cause for concern. But in August of the same year, a study presented at the International Society of Pharmacoepidemiology meeting in Montreal reported a two-fold increase in heart birth defects among children born to women prescribed ondansetron during the first trimester of pregnancy. According to the study authors, 4.7% of those treated with the anti-nausea drug gave birth to a child with a congenital abnormality, compared to 3.5% who had not received with the medication. Overall, ondansetron use was associated with a 30% increase in the risk for birth defects, mostly due to the increased prevalence of heart defects.

It should be noted that both of these studies drew data from the same Danish patient registry. However, the second study looked at a larger number of pregnant women (900,000 compared to 2,000) over a longer period of time (13 years compared to 7).

Last Modified: September 14, 2015
Private Case ReviewWere you or a loved one harmed by a prescription drug or medical device? Get a free case review.
Connect with: