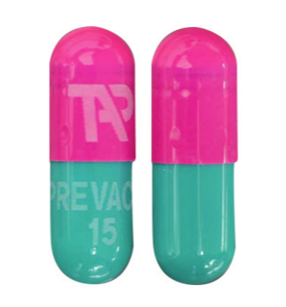 The proton pump inhibitor PrevAcid is an effective remedy for gastroesophageal reflux disease (GERD), peptic ulcers, and heart burn. However, the medication may be associated with a number of side effects, including bone fractures, Chronic Kidney Disease, and heart attacks.

PrevAcid (lansoprazole) belongs to a group of medications known as Proton Pump Inhibitors (PPIs), all of which work by blocking acid release in the stomach. The prescription version of PrevAcid was introduced in 1995 by Takeda Pharmaceuticals. It is currently indicated for

In 2009, the U.S. Food & Drug Administration (FDA) approved PrevAcid 24HR, an over-the-counter version of the drug. PrevAcid 24HR is marketed by Novartis.

The results of a new lab experiment  suggests that long-term exposure to proton pump inhibitors like PrevAcid may accelerate aging of blood vessels. According to a study published in Circulation Research in May 2016, this could explain the possible association between the drugs and certain serious complications, including heart attacks and kidney failure. Read More

In June 2015, an article published in PLOS One raised concerns that the use of prescription PPIs could increase the risk of heart attacks and cardiovascular death. The authors of the report examined the medications’ use in patients without a history of heart disease in two separate studies that encompassed some 3 million people. The findings suggested that PPI medications may increase the heart attack risk by 16 to 21%, and double the risk of cardiovascular death.

In January 2016, research published in JAMA: Internal Medicine indicated that patients using PPIs might be more likely to develop Chronic Kidney Disease, or CKD. The study looked at the rate of kidney disease in 10,482 patients who had been enrolled in the Atherosclerosis Risk in Communities (ARIC) study.  After adjusting for variables, the authors o the report found that PPI use was associated with a 20-50% increased risk of CKD.

In 2010, the FDA warned that patients who use PrevAcid and other prescription proton pump inhibitors may be more likely to experience fractures of the hip, spine and wrists. The risk appeared to be greatest among individuals over age 50, and among patients receiving the highest doses for a year or more.

Could PrevAcid be Associated with Dementia?

A study published in the JAMA Neurology in April 2016 suggested that regular use of proton pump inhibitors might increase a senior’s risk of dementia by 44%. The popular heartburn drugs are known to affect levels of two proteins that play a role in Alzheimer’s disease, amyloid beta and tau. The drugs have also been tied to B12 deficiency, which can lead to cognitive declines. Read More

A study published in May 2016 suggested that women who used PrevAcid  and similar heartburn drugs would do just as well on lower doses. Published in the  Journal of Clinical Gastroenterology, the study involved around 100 patients, half male and half female, who were taking proton pump inhibitors for  erosive esophagitis. During the experiment, half were treated with a reduced dose for an 8 week period. According to the authors of the report, women were three times more likely to tolerate the lower dosage compared to men. Read More

FDA Adds New Side Effect Information to All PPI Labels

In 2014, the FDA partially granted a petition filed by Public Citizen that sought the addition of new safety information to all prescription PPI labels. As a result, the following side effects are now noted on PPI labels:

Last Modified: July 27, 2016
Private Case ReviewWere you or a loved one harmed by a prescription drug or medical device? Get a free case review.
Connect with: