IVC filters are implantable devices designed to “catch” blood clots before they can travel to the lungs and become a pulmonary embolism. The small, cone shaped filters are implanted just below the kidneys, in the inferior vena cava. A number of medical device companies market these products, including C.R. Bard, Inc. and Cook Medical, Inc.

When is an IVC Filter Used?

IVC filters are used in patients who:

Generally, patients with blood clotting issues are treated with anticoagulants (blood thinning medications) such as Coumadin. IVC filters are an alternative treatment for patients who may not be eligible for anticoagulant therapy, or who do not respond well to blood thinners. 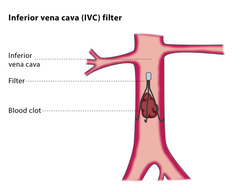 IVC filters are inserted by interventional radiologists or vascular surgeons. Patients are awake during the procedure and are given medication to help them relax, as well as an anesthetic to numb the area where the catheter will be inserted. A contrast dye may be injected through the catheter, and either ultrasound or x-ray will be used to guide the catheter to the appropriate place in the vein. Once the IVC filter has been inserted, the catheter will be removed.

While complications from an IVC filter procedure are uncommon, they do occur from time to time. They may include allergic reactions or kidney problems related to the use of a contrast dye, bleeding, or the formation of a blood clot where the catheter entered the blood vessel. The catheter may also damage a blood vessel, or the IVC filter may break and move to another place in the vein.

Retrievable IVC Filters, such as C.R. Bard’s Recovery and G2 filters, are intended to be removed once the danger of blood clots has passed. But recent research indicates that less than 10% of retrievable IVC filters are actually removed.

In 2010, the U.S. Food & Drug Administration (FDA) disclosed that it had received more than 900 reports of complications associated with the use of retrievable IVC filters, including:

The agency expressed concern that retrievable IVC filters were not always removed once a patient’s risk for pulmonary embolism subsides.

In 2014, the FDA issued a second communication to remind doctors about the importance of retrieving IVC filters.

Hundreds of IVC filter lawsuits have been filed in U.S. courts on behalf of individuals who were allegedly harmed by C.R. Bard’s Recovery and G2 filters, as well as devices manufactured by Cook Medical. In August 2015, a multidistrict litigation was established in the U.S. District Court, District of Arizona to handle federally-filed product liability claims involving Bard’s devices. A similar proceeding is also underway in the U.S. District Court, Southern District of Indiana for IVC filter cases involving Cook Medical.

Last Modified: August 2, 2016
Private Case ReviewWere you or a loved one harmed by a prescription drug or medical device? Get a free case review.
Connect with: