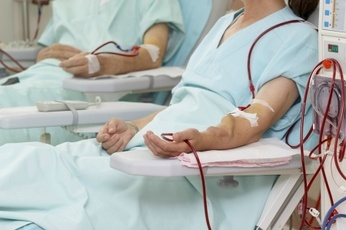 For dialysis patients who may have experienced a stroke or heart attack after treatment, the time is now to contact a GranuFlo lawyer. Attorneys throughout the U.S. are standing by to answer any questions you may have regarding the June 2012 recall of two acid concentrates that may be associated with serious, life-threatening heart problems. Hundreds of individuals have already filed GranuFlo and NaturaLyte claims alleging strokes, heart attacks, sudden cardiac death and other side effects stemming from the drugs, which are manufactured by Fresenius Medical Care.

By speaking with a dialysis lawyer, you may be one step closer to protecting your legal rights.

GranuFlo lawyers are keeping on the pulse of a nationwide dialysis drug litigation that gained momentum since June 2012, when a Class I recall was issued by the U.S. Food and Drug Administration (FDA). At the time, federal regulators issued a public health alert about the dangers of this medication and NaturaLyte, another acid concentrate manufactured by Fresenius Medical Care.

The majority of lawsuits filed over GranuFlo and NaturaLyte are pending in a federal proceeding underway in the U.S. District Court, District of Massachusetts. Among other things, plaintiffs in these cases allege that Fresenius failed to adequately warn about the dangers of its products, which may have been designed defectively. Claimants also say that the company’s Urgent Product Notification about GranuFlo and NaturaLyte injuries was issued too late, and that thousands of dialysis patients may have been injured in that time. Filed on March 29, 2012, Fresenius warned that these dialysis products contain a high amount of an ingredient the body converts to bicarbonate, which may result in a condition known as metabolic alkalosis.

The company may have had prior knowledge of GranuFlo and NaturaLyte side effects though, as evidenced in an internal memo sent in November 2011 to doctors in its dialysis clinics. According to documents received anonymously by the FDA, officials at Fresenius warned that 941 patient deaths had been tied to these dialysis medications, and that dosages should be adjusted to prevent further injuries. Physicians operating outside the Fresenius network were not made aware of these findings until March 2012, when the public health alert was issued.

Following the FDA recall of GranuFlo and NaturaLyte, the New York Times reported in June 2012 that regulators had begun to investigate whether the company’s handling of the dialysis recall was in violation of federal laws. Dialysis lawsuits similarly point to this news in their claims against Fresenius.

A number of GranuFlo lawyer practice groups in the U.S. have since filed these cases in a federal litigation established in the U.S. District Court, District of Massachusetts. Since claims were consolidated there in March 2013, more than 500 dialysis lawsuits have been filed in this proceeding.