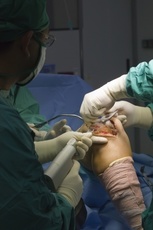 The nationwide law firm of Bernstein Liebhard LLP is now investigating potential forced air warming lawsuits on behalf of patients who may have developed MRSA, sepsis and other post-op deep joint infections following a hip or knee implant procedures that involved the use of the 3M Bair Hugger surgical warming blanket. Our attorneys are now offering, free, confidential, and no-obligation legal reviews to hip and knee replacement patients who may have been harmed by this device. To learn more about your legal options, please call (888) 994-5118 to get in touch with our legal team.

What is the Bair Hugger?

Research has shown that keeping patients warm during surgery leads to less bleeding, shorter hospital stays, and lower mortality rates. The Bair Hugger apparatus was brought to market by Arizant Healthcare, Inc. in 1987, which was acquired by the 3M Company in 2010. The system consists of a portable heating unit that forces warm air through a hose into a disposable blanket that is draped over the patient. The widely-used device is now standard in four out of five U.S. hospitalized, and has been used in more than 200 million surgeries since 1987.

Plaintiffs who have filed forced air warming lawsuits claim that the Bair Hugger suffers from a design flaw thatresults in disruption of laminar flow in the operating room, allowing potentially dangerous contaminants from the floor to enter the surgical site. This purportedly places hip and knee implant patients at an increased risk for serious deep joint infections. Plaintiffs further claim that the 3M Company and Arizant have been aware of this risk for years, yet failed to make design changes or issue any warnings to the medical community.

According to these lawsuits, the consequences of an alleged Bair Hugger infection can be dire, and often require patients to undergo numerous invasive medical procedures in order to bring the infection under control. These interventions may include:

According to the American Academy of Orthopaedic Surgeons, roughly 1 in 100 joint replacement patients will experience a post-op infection, either around the wound or deep around the artificial implant. Patients who develop this potentially debilitating complication may suffer from:

Deep joint infections can develop shortly after an initial implant surgery, but they may also present long after the procedure. If the implant itself becomes contaminated, the patient may require repeat surgeries to revolve the problem, including revision surgery to replace theartificial joint.

Am I Eligible to File a Bair Hugger Lawsuit?

Bernstein Liebhard LLP is now evaluating Bair Hugger forced air warming lawsuits on behalf of individuals nationwide. If you or a loved one were diagnosed with a hip or knee infection following implant surgery, please contact our office today to determine whether or not you might have a valid claim. Free case reviews can be obtained by calling (888) 994-5118.

Last Modified: November 8, 2016
Private Case ReviewWere you or a loved one harmed by a prescription drug or medical device? Get a free case review.
Connect with: