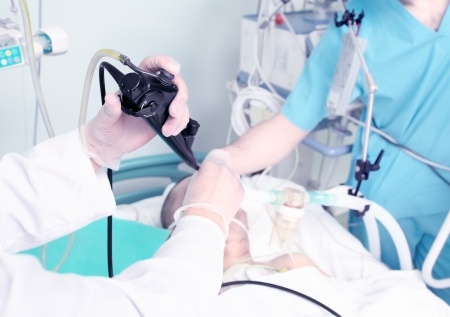 Duodenoscopes manufactured by Olympus Corp. and other medical device makers have been implicated in superbug infection outbreaks at hospitals around the country. It is believed that hundreds of patients were exposed to a dangerous pathogen called Carbapenem-Resistant Enterobacteriaceae (CRE) because of contaminated scopes. The duodenoscope superbug infections have also been linked to a number of fatalities.

Bernstein Liebhard LLP, a nationwide law firm that represents the victims of defective drugs and medical devices, is offering legal assistance to individuals who were exposed to dangerous superbugs as a result of contaminated duodenoscopes. To learn more, please contact our office at (888) 994-5118.

How Do Duodenoscopes Spread Superbugs?

Duodenoscopes are used in endoscopic retrograde cholangiopancreatography (ERCP) procedures to diagnose disorders affecting the bile ducts and pancreas. The  moving parts that make up these scopes contain many microscopic crevices, where residual body fluids and organic debris can accumulate. It has become apparent that cleaning and sterilizing duodenoscopes according to manufacturers’ specifications was not sufficient to eradicate contaminants.

In August 2015, the FDA sent warning letters to  Olympus, Pentax and Fujifilm accusing the  companies of failing to report problems with the devices  “Olympus and Pentax were specifically cited for failing to relay to FDA reports that their devices ‘may have caused or contributed to a death or serious injury’ within 30 days of learning about the event.” Bloomberg News reported. “Pentax and Fujifilm were cited for failing to make sure their instructions for cleaning the scopes were valid.” Read More

Bernstein Liebhard LLP is offering free, no-obligation legal reviews to anyone who may have been affected by duodenoscope superbug infections. To contact an attorney today, please call (888) 994-5118.