Dangerous and potentially deadly drug interactions are preventable medical errors that affect millions of Americans every year. Reactions between medications, or even drugs and certain foods, can make medicine less effective, increase its potency or lead to unexpected side effects. Drug interactions can occur with any type of medication, including prescription drugs, over-the-counter medicines, vitamins, dietary supplements and herbal products. 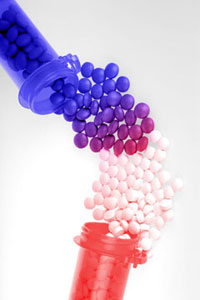 According to the U.S. Food & Drug Administration (FDA), some 40% of the U.S. population is taking one or more prescription medication. Any time a patient is using multiple drugs, the possibility exists that they may experience an adverse reaction due to the way the products interact with one another. Some common drug interactions include:

Certain foods can impact the way a medication works in your body. Examples include:

According to the FDA, 50% of patients take dietary supplements. These products can also interact with medications in dangerous ways. Some examples:

The FDA advises patients to take steps to avoid dangerous drug interactions. These include asking your doctor about foods, supplements and medications to avoid whenever you are prescribed a new drug. You should also check with your pharmacist or doctor before you begin using an OTC medication to insure that it will not interact with any of your prescriptions. Keep your healthcare providers informed about the drugs your are using, and take a complete list of your medications to all of your medical appointments.