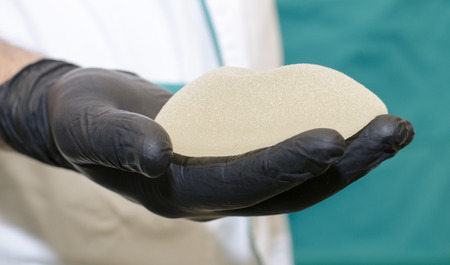 Nearly 400,000 women receive breast implants during augmentation and reconstructive surgeries. However, recent reports linking textured breast implants to a rare cancer, and accounts of debilitating symptoms among women with silicone breast implants, have raised new concerns over their safety.

Two types of breast implants are currently available in the U.S.

Saline breast implants are filled with either saline or sterile water, while silicone implants contain silicone gel. According to the American Society of Plastic Surgeons, the breast implant market was worth $635 million last year, with most women opting for silicone devices.

The shell surrounding a breast implant may be smooth-surfaced or textured. Smooth breast implants feel softer and more natural, but are more likely to move freely during activity. The shell of a textured implant feels rough, like sandpaper. The textured shell helps the breast implant adhere to breast tissue and prevents the implant from rotating.

A textured surface is necessary for:

Silicone gel breast implants were initially brought to market in the early 1960s. By the mid-1990s, however, hundreds of thousands of women had filed lawsuits for autoimmune and connective tissue disorders that were allegedly caused by leaking silicone implants.

In November 1995, a global settlement was reached involving implants marketed by Bristol-Myers Squibb Co./Medical Engineering Corp., Baxter Healthcare Corp./Heyer Schulte, the 3M Company and McGhan Medical.  Dow Corning, which was forced to seek bankruptcy protection in 1995 due to the overwhelming litigation, would agree to a $3.2 billion breast implant settlement in 1998.

In January 1992, the FDA announced a voluntary moratorium on silicone-gel breast implants, so that it could review the safety and effectiveness of the devices. In April of the year, the agency concluded that access to silicone implants should continue only for patients undergoing breast reconstruction or for replacement of existing silicone gel-filled breast implants (revision).

The FDA ended its 14-year virtual ban in November 2006, despite lingering safety concerns. Since then, five silicone gel breast implants have been approved for sale in the United States.

As is the case with any surgery, women undergoing breast augmentation may experience a number of serious side effects. According to the FDA, these complications include:

Textured breast implants have been linked to anaplastic large cell lymphoma (ALCL), a rare form of non-Hodgkin’s lymphoma.  The FDA confirmed this risk in March 2017, after logging 359 reports of the disease in patients with breast implants, including nine deaths. Most of those cases involved textured implants.

By July 2019, however, the number of confirmed cases of breast implant-associated ALCL had ballooned to 573, while 33 women had died. At least 119 cases had been reported to the FDA since February 2019.

The majority of breast implant cancer reports – 481 — involved Allergan’s textured Biocell implants. Of the 13 deaths for which a manufacturer could be identified, 12 occurred in patients with Biocell textured implants.

After an FDA analysis linked Biocell implants to a 6-fold increased risk for ALCL compared to other textured breast implants, the agency asked Allergan to recall those devices. The company agreed, and announced a worldwide Biocell breast implant recall on July 25, 2019.

Since sales of silicone breast implants resumed in 2006, hundreds of recipients have reported joint pain, connective tissue disorders, cognitive impairment, and other symptoms said to be typical of “breast implant illness.”

So far, the FDA has not been able to confirm a causal link between these symptoms and silicone breast implants. However, in May 2019, the agency acknowledged that some women experience systemic symptoms, including chronic fatigue, cognitive issues, and joint and muscle pain, following breast implant surgery, which may resolve once the devices are removed.

The FDA indicated it was considering several actions to ensure women and doctors are aware of the risks linked to breast implants, including a Back Box Warning and requiring that doctors go over a checklist with their patients prior to surgery.

Last Modified: July 25, 2019
Private Case ReviewWere you or a loved one harmed by a prescription drug or medical device? Get a free case review.
Connect with: